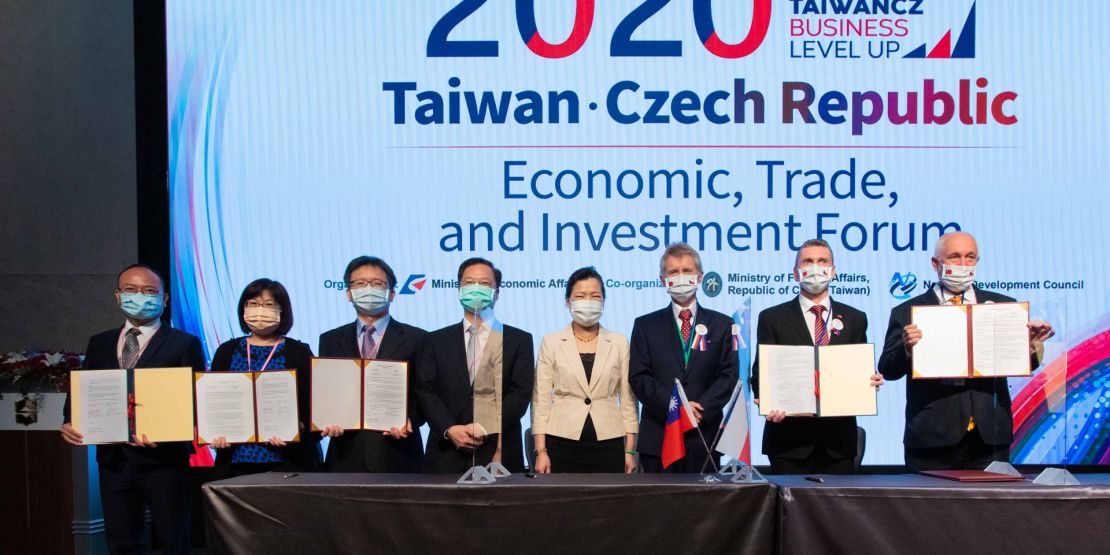 What Results Has Yielded the Business Delegation TaiwanCZ BUSINESS LEVEL UP 2020?

Last year, the President of the Czech Senate, Miloš Vystrčil, traveled to Taiwan, accompanied by a group of representatives of 36 Czech companies heading to the island as part of a business mission.

Under the auspices of the Czech-Taiwanese Business Chamber, entrepreneurs aimed at further shifting mutual cooperation on specific projects, joint development, and production. Taiwan is a tech giant and the 4th most innovative country worldwide, with its economy consisting of almost 85% small and medium-sized enterprises. According to Pavel Diviš, Chairman of the Czech-Taiwanese Business Chamber, cooperation with Taiwanese companies can help the Czechs break free from the trap of cheap production and accelerate the automation of industrial production and the adoption of modern technologies. Taiwan does not ask how many free hands we have, but how many free brains we have.

So what are the outcomes of the business mission?

OVERAX Technologies, a key supplier of tantalum ore from West Africa, successfully negotiated the first test shipment from KEMET Electronics Corporation in the USA. KEMET Electronics is the world's largest manufacturer of tantalum capacitors, owned by the Taiwanese company YAGEO Corporation. The negotiated contract is worth $ 24.8 million with the potential to climb up to $ 75 million.

Another company, Circular Energy, dedicated to waste, plastic, and tire recycling, was approached by ECOVE, the leading company in the field. ECOVE has shown great interest in using Circular Energy's thermal decomposition technology to recycle plastic parts from cars and safety films from windows. Currently, Circular Energy and ECOVE are in the final stage before signing the contract for the construction of the first thermal recycling of plastics in Taiwan with a capacity of 6,000 tons per year. The contract is worth more than € 4 million and is the first demonstration line of this modular, fully automatic technology in Asia.

According to StemCon, which operates in the field of the refinery, chemical industry, energy, and water supply, the mission has helped to open the doors for their expansion to the whole Southeast Asia region. StemCon has successfully established cooperation on several projects worth € 3 to 10 million with the most leading companies in the industry, such as Taiwan Water, CPC, and FPPC.

The business mission has also yielded concrete results for the representatives in the field of ecology in construction. For instance, Červenka Consulting and the Taiwan University (NTU) have been discussing more efficient utilization of ecological solutions in construction as well as terms of cooperation in the bilateral TAČR project.

In the IT/tech sector, TAKTIK has established cooperation with several companies, particularly in the healthcare industry, while ALGOTECH has been in regular contact with two manufacturers of IT equipment and one partner in production robotics. ATG has accelerated to the advanced stage of the pilot project of the qualification of NDT personnel for aircraft maintenance in the company EGAT (EVA AIR) thanks to the business mission, while a smart-tech company Sequent has moved its Taiwanese employees to new, larger premises thanks to the recent heightened growth.

Some companies have also managed to conclude a Memorandum of Understanding, such as an engineering company TGS, which has been already successfully implementing the project “Digitization of Engineering” based on the signed MoU with the RCMT Research Institute.

The Czech-Taiwanese Business Chamber has also registered an increased interest in establishing cooperation between the cities of the two countries and heightened cooperation at the academic level in the fields of science, research, and education. For instance, a space research partnership was established between the Taiwan National Space Organization and the Czech Institute of Physics and Atmosphere of the Academy of Sciences of the Czech Republic, the Faculty of Mathematics and Physics of Charles University, and the Institute of Technical and Experimental Physics of CTU.

All in all, the Czech Republic is the ideal gateway to the EU for Taiwan as we offer a stable and developed market. Communication at the intergovernmental level is, at this point, particularly essential as it's necessary to prepare the ground for the entry of Taiwanese investors. Miloš Vystrčil, President of the Czech Senate, concluded that identifying and seizing the opportunities the business mission created is a significant challenge for the Czech industry and business. The Czech enterprises will either win the opportunities over or watch as another country uses them.